After quite a while — new Babelzilla was launched officially!

Posted in gsoc, mozilla, Uncategorized | Comments Off on It lives!

A week ago I was presenting Adofex to the crowd of happy localizers. The room was packed tight and the air was sparkling with excitement. Kinda 🙂

The presentation was centered on features of Adofex, telling people about the new features and UI that will make their lives easier both as translators and as addon maintainers. Wladimir Palant, the author of Adblock Plus, was eager to try and also to hack the new system. That is really inspiring!

Also, the community raised a very valid point about team ownership. As one of important features of the new system over the old one, I wanted to see unified translation teams. One-language-one-team. Yes, per-project teams are also totally possible, just are not the default.

With that setup, all members of language team would

With all that said, I have a confession to make. I am actually looking at this from the boss side of the table. I am a maintainer of Ukrainian localization, have been localizing Firefox itself and few key addons for ages, and I get frustrated when I am not able to fix typos/mistranslations/missing strings in addons owned by other people. And filing “join team” requests, then waiting for them never to get a response was not an encouraging thing.

So, I created my own system, with blackjack and whistles, the one that fits the workstyle of a WikiGnome perfectly: once you are in a team, you are free to improve whatever you want.

Thing is, not everybody is a Gnome. Most people are Maintainers, and some are even Trolls. Maintainers are the ones who care about their favorite addon, they are added to the list of localizers in credits section and they do not want any outsiders to mess around. Trolls are the who guys care more about language purity and ‘proper’ term usage than doing hard work of translating kilobytes of text. One Troll autoreplacing “center” with, say, “centre” with no ability to roll that change back can easily alienate many Maintainers.

And, actually, in an environment (Launchpad) where I do not have the master switch in my hand, and where any of my pet translations can be (and are) edited by some guys whom I have never asked to – I do not like it myself.

To give people sense of satisfaction and well-earned fame – they should be able control the results of their work. Outsourced projects still is a useful feature to have, because Adblock Plus and Adblock Hiding Helper should really have the same teams working on them. But whether to outsource every new project to global team – that is a question. At least until someone implements translation history (#705) for Transifex – which would at least explain who changed what.

A feedback here would be greatly appreciated.

PS: for those who haven’s seen that great show, the source of team joke is IT Crowd.

P.P.S. Seems that the picture in the top of the post was brought bad mojo into it. I really hope it ended.

Posted in gsoc, mozilla | Comments Off on Adofex at MozCamp 2011: Team-team-team

The summer has ended, results are submitted, yet the Adofex evolves on. Since last report following changes happened:

Transifex as a project evolved from Fedora translation system emphasizes Resources too much, paying less attention to the Languages. As a temporary measure against it, an always-present Release called ‘All-Resources’ exists, and it has stats for all the languages and can serve as an entry point.

As some of my patched were getting checked in, and some required refreshing, forked transifex repo was no longer a good option. So,

Posted in gsoc | Comments Off on End of summer

Importing data from Babelzilla could never been easier: 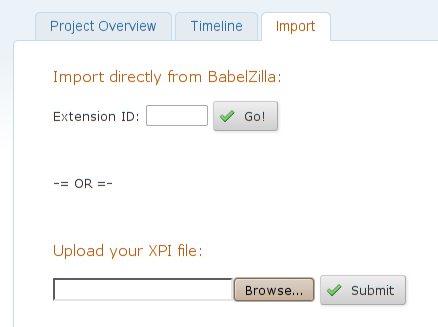 You can try it on Adofex having registered/logged in and created a new test project. ID for Adblock is 4592, for Stylish — 4983. Kudos to Bz devs for making their data available.

Reskinned transifex with support for Mozilla formats deployed at adofex.clear.com.ua, addons imported through management command, I am finishing UI for uploading them.

Posted in gsoc, mozilla | Comments Off on That’s how it looks

Not so good news: The project-creation wizard (import from github/bitbucket), dashboard etc – “stuff that makes transifex.net interesting” – are closed source addons. Also, navigation issues and general unfriendliness to a localizer are all mine – no one else is currently working on them.

Thus, to make that cutie the next and better Babelzilla – a little more than the format support is needed. Dashboard, streamlined navigation, XPI-based newproject wizard (every addon author have an xpi, even if he does not have a source repo, so xpi-reading seems to be more important), just to name some. Working on.

Posted in gsoc, mozilla | Comments Off on patch filed

Posted in gsoc, mozilla | Comments Off on short status update

DTD and .properties parsers work, tests for them (mostly reused from JavaProperties parser) do pass. The substitution of translated strings into “template” (the original file to be localized, with all its comments and formatting) also works, making it possible to correctly upload and download l10n files, even half-translated. And, of course, the fabulous online editor Lotte shines its goodness on good ol’ addon localization files.

Through to brew the code in my fork to the state when it can yield the patch ready to be filed, two things need to be done:

JavaPropertiesHandler’s format tolerance is not a problem, and neither is its habit of expecting Latin-1. I can try two of them in turn, Java and Moz, one after another, checking for ability to decode incoming file. Java will accept Latin, Moz will accept UTF8, everybody happy.

But who will be in charge of outputting the content? It will not be possible to judge target platform by file-to-be-localized extension, and neither by its encoding : usually those are in English, and only in some cases they carry fancy characters like Unicode ellipsis.

Speaking of the screenshot above, it shows a picture unusually rarely seen in Transifex, yet so common on Babelzilla and so natural for a localizer to see. Tx experience is organized as Project-Resource-Language-edit, and the “Localizer’s view” where you see all the files in your language and their status — the thing that obviously interests you the most — is hidden in Teams tab (when teams are enabled!), and is not the one you go back after editing a resource. Haven’t found a bug on that, gonna file one.

Also hacked a prototype for addon-repacker, the python script which will be adding localized resources (dtd/properties) to given xpi files for ease of testing. As its purpose is testing and testing only, final shipping is author’s business anyway, it uses very straghtforward approach: adds files into someaddon.xpi/tx_locale/code/ and fiddles with chrome.manifest to expose new locale for the same content package other locales are. Might fail for complex files with multiple content packages being localized, but that seems quite uncommon.

Posted in gsoc, mozilla | Comments Off on One .DTD and two .properties parsers

I am still working on dtd reader, taking existing java .properties one as an example how Handler class should be implemented. Hopefully will finish this part on this weekend.

Posted in gsoc, mozilla | Comments Off on Still in /resources/formats

So far so good. My current task on the project is extending the Transifex system with new format, as an obvious start point and a foundation for the ongoing work. I enjoy working with Tx code (development tip), it is well commented and organized. Had few issues while installing the project (requirements.txt was out of date), but other than that the experience was smooth.

Among the other format readers there is Java .properties reader, which unfortunately works only with ISO 8859-1 encoding (other characters have to be represented as Unicode escapes). I plan to replace its reading code with Silme calls, along with writing DTD reader. The one thing to check is whether Silmefied .properties reader would supersede original one totally, or I would have to check which one to call. I would like to avoid that, as currently Tx picks file reader only by extension and magic number, which is obviously the same for Java and Mozilla .properties file.

Rounded up a few things besides of GSoC during during start of June, like the studies, and Thunderbird/Calendar localized release and can devote more time to the project now.

Next talk with mentor is scheduled to June 21th, and I hope to have working prototype by then.

Posted in gsoc, mozilla | Comments Off on Diving into Transifex